For years Ukraine’s economy has lagged behind most of its Eastern European neighbors.

There is progress, however: the country has climbed 78 places in the World Bank’s Doing Business ranking and 28 places in the Economic Freedom Index over the past 10 years.

Here are five books that explain how and why the Ukrainian economy is there, what the current economic outlook is and what the future may hold for the country.

Ukraine’s IT industry is booming: the country is home to the world’s best IT outsourcing companies and 170,000 popular technology specialists abroad. Written by Andrei Kirilenko, associate professor at Cambridge University of Finance, and Ukrainian economist Glib Buryak, the book tells the story of local high-tech companies, Ukrainian computer geniuses, their heritage and industry outlook. 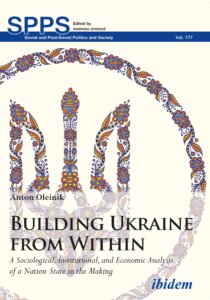 Sociology and economics professor Anton Oleinik argues that Ukraine is currently going through a revolutionary period as it builds a nation state. In his book, Oleinik analyzes social, economic and political developments in Ukraine after the 2013-2014 Revolution of Dignity and during the ongoing war with Russia. The book examines how the politics of Ukrainian elites may or may not lead to the emergence of a viable and sustainable national democratic system in the country. 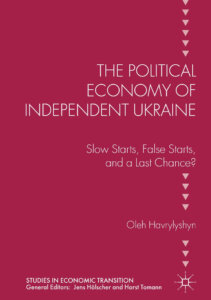 Canadian economist of Ukrainian origin, Oleh Havrylyshyn traces the economic transformation of Ukraine since the country’s independence in 1991. The book analyzes a slow evolution of economic reforms under the leadership of local elites and oligarchs with selfish interests. Havrylyshyn explains the results of Ukraine’s 25-year-old economy and tries to predict what might happen next. 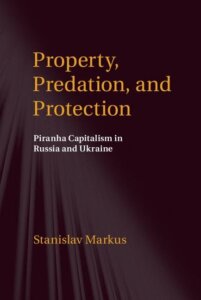 The book presents a vivid account of the so-called “piranha capitalism” in Ukraine and Russia, where property rights are threatened by piranha-like actions of low-level officials – their corruption and bureaucracy. By conducting over 150 interviews with business owners, policymakers and bureaucrats, Markus explores how state and business interact in countries with emerging markets. The author concludes that companies can protect themselves through alliances with foreign companies and local communities. 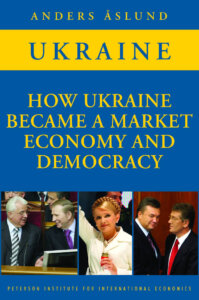 Today Ukraine is an independent state with a market economy and private ownership, but it was not always so. In his book, Swedish economist Anders Aslund discusses the ups and downs of the Ukrainian economy: from the “Perestroika” reforms of Soviet leader Mikhail Gorbachev to the 2004 Orange Revolution and the precarious post-revolutionary period. The author addresses the issues of Ukraine’s political instability, widespread corruption and dysfunctional constitutional order hindering progressive reforms and Ukraine’s attempts to gain full recognition as a European state.

Exports of sunflower oil, crucial for the Ukrainian economy, are blocked