Fact check: No, this video is NOT from kyiv, the capital of Ukraine, but from Kharkiv

Amid the ongoing Russian invasion of Ukraine, a photo of a missile inside an apartment kitchen has gone viral on social media.

Several social network users shared the photo with the following claim: “This Russian missile flew into a house near kyiv in Ukraine where a family of nine children were praying the Rosary in their living room. The projectile pierced the ceiling and hit the kitchen without exploding.

This Russian missile hit a house near kyiv in Ukraine where the family with nine children was praying the Rosary in their living room. The projectile pierced the ceiling and hit the kitchen without exploding. Coincidence? No. Providence! pic.twitter.com/mMs7Tpvcqh

The Anti-Fake News War Room India Today (AFWA) found the claim accompanied by this photo to be misleading. The photo is not from kyiv, but from Kharkiv, the second largest city in Ukraine. Second, there are no credible reports to suggest that a family of nine children miraculously escaped from the house in question.

Archived versions of messages with similar claims can be seen here and here.

We flipped the image and found that The sun had used the same photo in a report published on March 22, 2022. The title of the report read: “A stunning photo shows an unexploded Russian missile sitting in the kitchen sink of a Ukrainian family.

The report said an unexploded Russian missile was found lodged in the kitchen sink of a Ukrainian family’s home “after hitting the roof”. The missile would have only caused damage to the ceiling and the sink of the house in Kharkiv.

This showed that the photo (and the incident) came from Kharkiv, Ukraine’s second largest city, and not the capital kyiv. Second, there was no mention of a family of nine who had miraculously escaped in the report.

The Ukrainian government also shared the photo of the unexploded missile from its official twitter handletweeting: ‘Imagine it was Sunday morning and you were sleeping with your children’, as he again called on NATO to impose a no-fly zone over the country.

But the tweet didn’t reveal any other details about the photo.

We discovered that the same photo had been published in reports by the Daily Mail and other media. Although these reports indicated that the photo was from Kharkiv, none of them mentioned anything about the family residing in the house.

Although we have not been able to independently verify the claim about the family with nine children, we can conclude that the photo is not from kyiv, but from Kharkiv.

(With contributions from Yash Mittal in New Delhi) 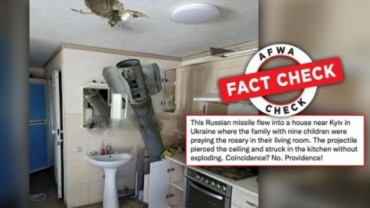 To claimThis Russian missile hit a house near kyiv in Ukraine where a family of nine children were praying in their living room. The missile pierced the ceiling and hit the kitchen without exploding. ConclusionThe picture is not from kyiv. He comes from Kharkiv. We found no credible reports that a family of nine children lived in the house and miraculously escaped the situation.

The number of crows determines the intensity of the lie.