News from Ukraine: Key moments in Canada’s support during the war

It has been six months since Russia launched its current attacks on Ukraine on February 24, prompting months of death, destruction and condemnation from the international community.

From the start of the invasion, Canada supported Ukraine, offering financial, military and humanitarian assistance, all the while seeing the House of Commons unanimously declare what was happening in Ukraine a “genocide”.

The federal government has also acted in concert with other countries to level sanctions on an ever-growing list of individuals and entities, promising that further retaliatory measures will come despite Russia’s pushback.

With no looming end in sight, Prime Minister Justin Trudeau said Monday that while he hopes the war can end “quickly,” Canada “will be there to support Ukraine and the Ukrainian people with what they need. as long as it takes.”

“Ukraine is certainly fighting for itself… But it is also fighting for all of us… and that is why we are unequivocal: Putin must not win,” Trudeau said.

While the impacts of what the Prime Minister called Russian President Vladimir Putin’s “unlawful and unthinkable invasion” are of course felt most harshly in Ukraine, the war has had global political, political and diplomatic implications, including here in Canada.

Marking the sixth month since the start of the war, CTVNews.ca looks at six key moments for Canada.

In March, Ukrainian President Volodymyr Zelenskyy presented the realities of war on the floor of the House of Commons.

In his blunt and moving virtual address to parliament — donning a military green sweater with a Ukrainian flag on one side in his frame — Zelenskyy implored Canada to help his country further in its fight against ongoing Russian attacks.

During his 20-minute address, Zelenskyy called on Canada to continue its military and humanitarian response efforts and maintain its sanctions against powerful and influential Russians until they have “one dollar left for fund their war efforts.

The Ukrainian president also sought to put Canadians in the shoes of Ukrainians, detailing the realities of Russia’s war. Asking if Canadians could imagine waking up to bombings in their city, or asking their kids what was going on, having to flee to bomb shelters with food, water or limited connectivity, Zelenskyy said. painted a grim picture of what was at that time 20 days of war in Ukraine.

On the heels of Zelenskyy’s impassioned speech, the Trudeau government felt concerted pressure to increase defense spending in the April 2022 federal budget.

Although a substantial increase in Canadian defense spending may not have been anticipated before, the war in Ukraine has prompted concerted calls for Canada to meet the NATO commitment to spend 2% of its gross domestic product (GDP) to defence.

Budget 2022 did not allocate enough to deliver on this commitment, although Deputy Prime Minister and Finance Minister Chrystia Freeland unveiled an $8 billion spending package focused on both additional aid to Ukraine, while strengthening North American defense systems.

In addition to reviewing national defense readiness, the government has pledged “up to” $1 billion in new loans to the Ukrainian government through a new “administered account for Ukraine at the International Monetary Fund (IMF)” and pledged to offer an additional $500. million euros in military aid to Ukraine.

In May, Trudeau had a surprise weekend in Ukraine.

The visit, meant to show Canada’s support for the country, also included the prime minister reiterating the federal government’s commitment to provide military assistance to Ukraine and came with another round of sanctions against Russia. 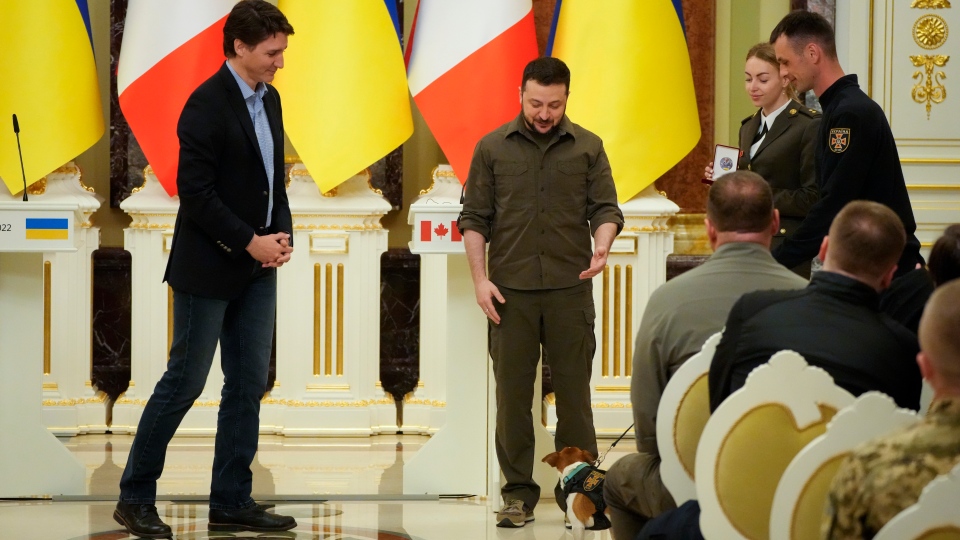 Trudeau was accompanied by Freeland and Foreign Affairs Minister Melanie Joly on the trip. They visited the devastation in the Kyiv suburb of Irpin, which was heavily shelled by the Russians.

“It is clear that Vladimir Putin is responsible for heinous war crimes. There must be accountability. Canada will stand with Ukraine as you demand justice for your people whom Russia is killing and brutalizing,” Trudeau told reporters. reporters in the field.

This visit followed trips to Ukraine by other world leaders and was seen as a key signal of solidarity and strength.

During his trip to Ukraine, Trudeau also announced the reopening of the Canadian Embassy in Kyiv. To mark the reopening, he participated in a Canadian flag-raising ceremony at the embassy alongside Freeland, Joly and Canadian Ambassador to Ukraine Larisa Galadza.

The embassy had been closed and diplomatic staff largely relocated in early February, weeks before Russia invaded Ukraine. By the time Canada announced the reopening, the government was already facing mounting pressure to re-establish a diplomatic presence, as many allies had done. 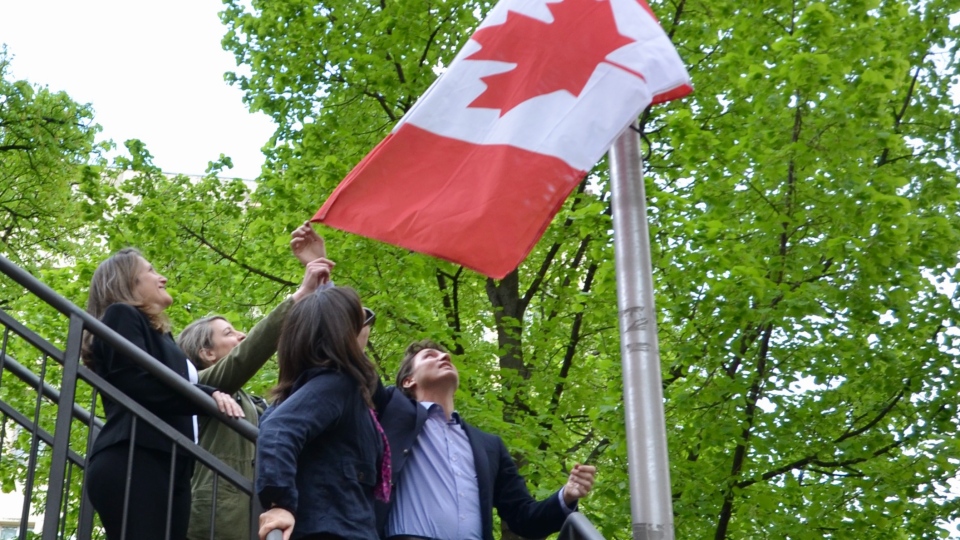 However, the move was almost entirely symbolic. There is still no full restoration of embassy services and, according to The Canadian Press, as of the end of July, the ambassador was still not working at the embassy for security reasons.

Back home, amid calls from some for the federal government to expel Russian diplomats from Ottawa, the city decided to put up blue and yellow “Free Ukraine” signs in front of the Russian Embassy.

The war in Ukraine also prompted thousands of Ukrainians to come to Canada, prompting communities across the country to come together to collect supplies and help their new neighbors settle here.

Since the federal government first announced in March that it would open new avenues for Ukrainians to seek refuge in this country, approximately 74,500 Ukrainians have arrived in Canada. 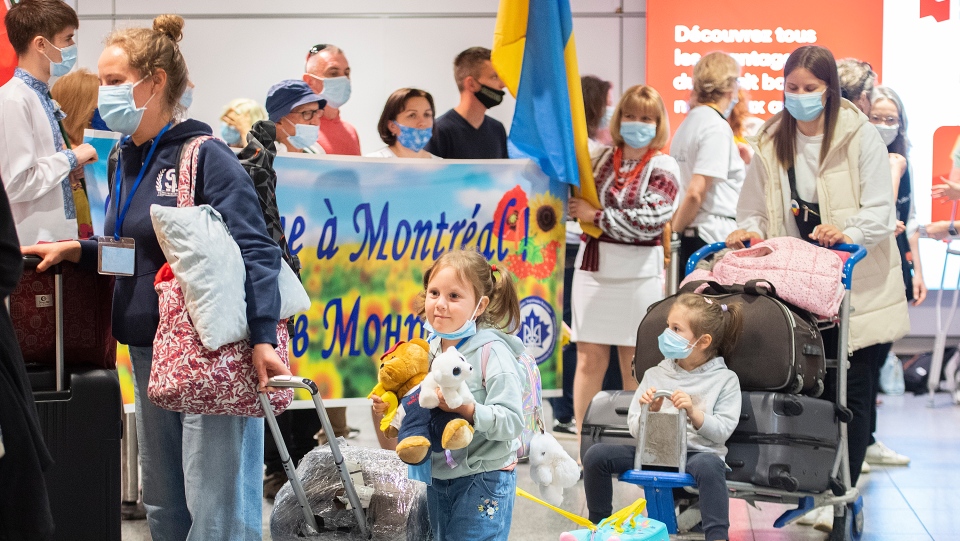 However, less than half of the approximately 495,900 applications received under Canada’s emergency travel authorization to travel and stay temporarily in Canada have been approved, according to the latest federal figures.

And, while Canada still has no plans to send troops into combat in Ukraine, Canadian soldiers are called upon to help train the Ukrainians.

Earlier this month, Defense Minister Anita Anand announced that up to 225 members of the Canadian Armed Forces would be deployed to participate in a training mission for Ukrainian soldiers in the United Kingdom as part of the Unify operation.

TURBULENCE OF THE NORTH STREAM TURBINE

After months of steadfast unity between Canada and Ukraine, the federal government’s decision in July to grant a two-year exemption from federal sanctions allowing a Canadian company to return repaired turbines from a Russian-German gas pipeline caused the first real rupture between the two countries since the beginning of the war.

That was Putin’s goal, the federal government argued, saying the Russian president’s attempts to weaponize energy as a means of driving a wedge between allied countries were really behind Russian state energy company Gazprom which shut down the taps of its gas flow through the North. Steam 1 to Germany.

The decision drew quick and furious reactions from federal opposition parties in Canada, as well as Ukrainians, including Zelenskyy, who called it a “show of weakness.” However, this decision was supported by the United States and other NATO allies, and Canada continues to support it. 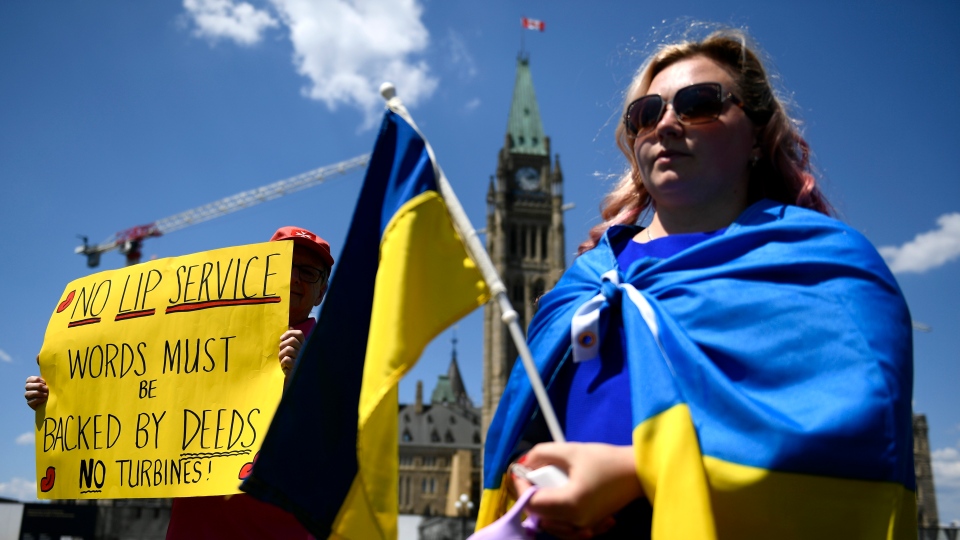 Considerable details were shared by key players in government and diplomacy about what led Canada to make this decision during a special summer parliamentary committee study earlier this month.

“This derogation is not a one-off decision. Maintaining the six turbines in Canada will strengthen Russia’s ability for years to come to weaponize energy and derail efforts to combat climate change, and it will be done with Canada’s blessing,” said Ukraine’s ambassador to Canada, Yuliia Kovaliv said in her August 4 testimony. already failed to prevent war in Ukraine.”

Although the turbine has been returned, it remains out of service, prompting Ukrainians to renew calls for Canada to immediately revoke the permit.

Zelensky to address UN meeting – on video from Ukraine – News