Many, including Indian students who have gone to Ukraine, now fear for their lives. It comes a day after the Indian Embassy in Ukraine, in a notice, asked Indians – especially students in Ukraine to consider leaving temporarily. The advisory also said all non-essential travel to and within Ukraine should be avoided. 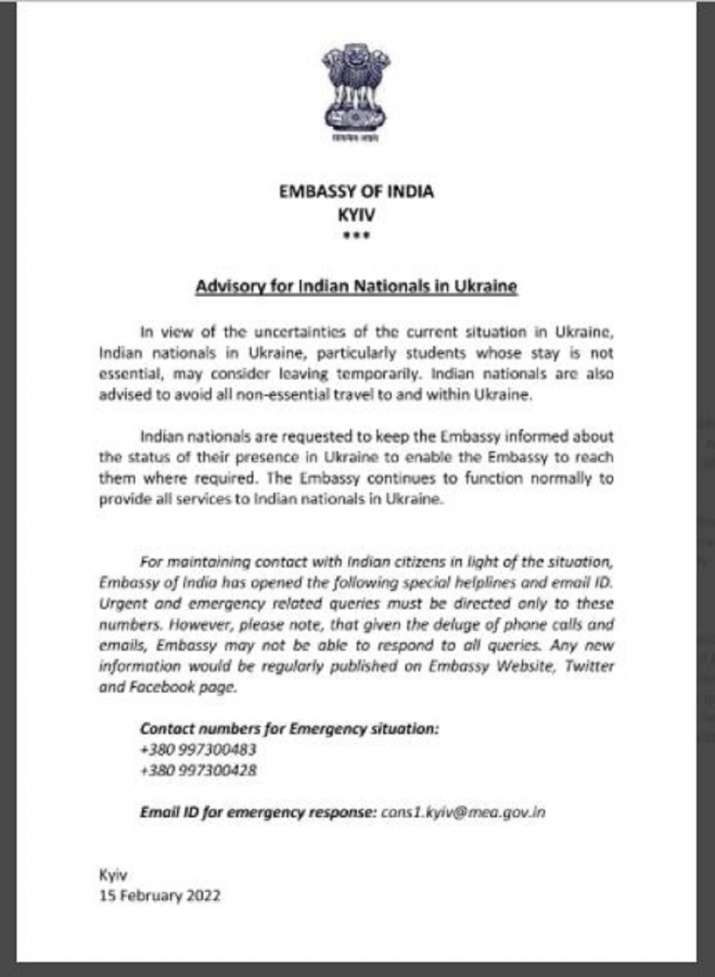 On Wednesday, some Indian students in Ukraine spoke to India TV Digital about the challenges they face in the country. Sharing survival stories, Akshank Sharma, a first-year general medicine student, told India TV Digital that several students had booked plane tickets for safe return to India.

“There was a panic situation here and many students booked their flights,” Akshank said.

However, leaving classes in the middle of their academic session and traveling to India will be expensive, he added, noting that universities have already issued a notice saying students will have to rework their missed classes if they decide to leave. .

Akshank shared an advisory from Kharkiv National Medical University, which confirmed the continuation of offline classes for students despite border tensions with Russia. 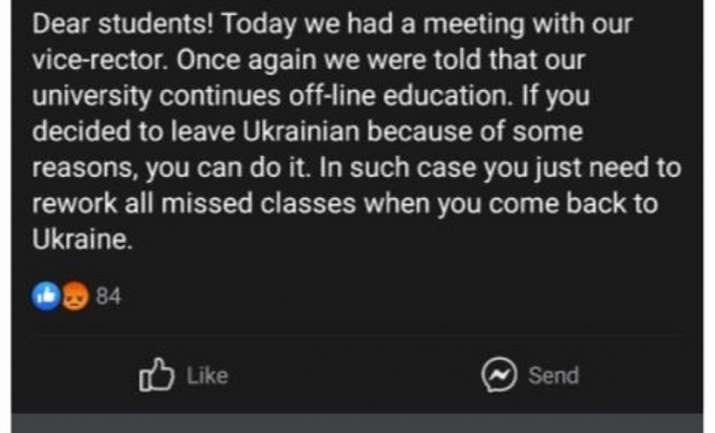 Tensions around Ukraine have risen in recent months, with Russia and NATO accusing each other of amassing troops on the Russian-Ukrainian border. The United States and Ukraine accuse Russia of planning an invasion, but Moscow continues to deny these claims and maintains that it does not intend to attack any country.

Meanwhile, another Indian student, Rohit, who has booked a plane ticket to India, said he may consider canceling the ticket if the situation improves. Plane tickets are currently more expensive and students have no choice but to pay the high amount to return home.

“Our parents in India are worried,” Rohit told India TV Digital, adding, “I’m going to have the tickets canceled because we can’t afford to miss our classes, plus the ticket prices have gone up dramatically.”

Speaking on college and university guidelines, another Indian student who did not wish to be named said that offline classes were going on as usual and that we had not received any notice of a schedule change or of route. There are no restrictions on the movement of people in Ukraine, the student said.

Commenting on the notice from the Indian Embassy, ​​Akshank said that “the notice was issued at a time when things had almost started to fall back into place.”

Kharkiv is about 35 km from the Russian border and Akshank said the situation was tense until a few days ago.

Another student said he had not received a temporary residence permit from Ukraine. Therefore, leaving the country and returning later would mean starting the visa application process over again, which would cost them almost 50,000 rupees in Indian currency.

Russia continues its war games near Ukraine’s borders and across its vast territory. According to the United States, Russia had increased its force near Ukraine by 7,000 men. Across Ukraine, citizens of all ages waved flags in the streets and at apartment windows. Hundreds of people unfurled a 200-metre (650ft) flag at Kyiv’s Olympic Stadium, while another was draped in the center of a shopping mall in the capital.

The Russian Defense Ministry has announced that some units participating in military exercises will start returning to their bases. He also posted footage of a train of armored vehicles leaving Crimea, which Russia annexed to Ukraine in 2014.

Meanwhile, the crisis is causing ripples in the skies and seas.

Ukraine International Airlines said it sent some of its passenger planes to Spain “to keep them safe”. The airline said it made the decision under pressure from insurance companies “due to the foreign policy situation”.

Castellón airport in eastern Spain said five planes had arrived, with a sixth expected. The Ukrainian airline continues to operate to and from the country with a reduced fleet.

What’s going on in Russia?

Western officials say that even if an invasion is not imminent, Russia could keep troops massed near Ukraine for weeks, turning the military buildup into a protracted crisis that has already hurt Ukraine’s economy. Russian forces continued their massive war games on Wednesday in Belarus, northern Ukraine, with warplanes carrying out training missions and paratroopers carrying out firing exercises.

The West fears the drills could be used as a cover for an invasion of Ukraine, but Belarusian Foreign Minister Vladimir Makei said all Russian troops and weapons would leave the country after the drills end on Sunday.