Boris Johnson and Emmanuel Macron have agreed that countries on NATO’s eastern flank must be “fully defended against malicious Russian activity”.

This applies “where and how it can happen”, added the two leaders.

With Russia still fearful of invading Ukraine, the British prime minister and the French president “also stressed that NATO must stand united in the face of Russian aggression,” Downing Street said.

New signs of a Russian invasion?

In other developments, US troops arrived at an airbase in southeastern Poland.

President Biden has ordered that 3,000 soldiers will be sent to support NATO allies only tensions between the West and Moscow continue to increase.

And the leaders of Germany, France and Poland will meet in Berlin on Tuesday, in an attempt to de-escalate.

Johnson and Macron said resolving the dispute through diplomatic means must “remain the top priority”.

They also agreed to “work together to develop a set of sanctions that would take effect immediately if Russia further invades Ukraine.”

Russia has denied plans to invade, despite deploying 100,000 troops on the border. 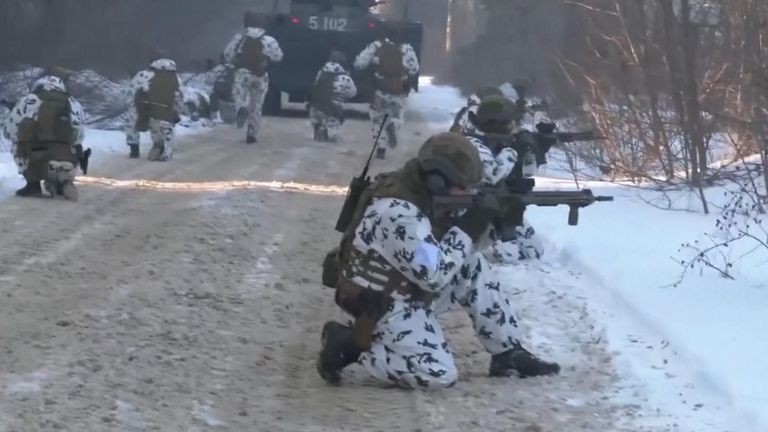 Ukrainian forces train in the ghost town of Chernobyl

Moscow demands that NATO never admit Ukraine as a member.

Read more:
Putin turns to China as tensions with Western leaders rise
‘We have to get used to it’: Ukrainians are fatalistic in the face of the latest Russian threat

The French leader stressed the “need to continue efforts to find through dialogue a path of de-escalation” which respects the “fundamental principles of European security, the sovereignty of States and the rights which derive therefrom”, indicated his office.

In the meantime, three new signs have been observed which suggest a Russian invasion of Ukraine may be imminent.

The construction of a field hospital, the movement of additional troops to the border and the deployment of Russian military police suggest that more invasion preparations are now in place.