Ukraine’s economy is more than wheat and raw materials

Ukraine is one of the largest countries in Europe, with an area of ​​approximately 600,000 square kilometers (231,000 square miles) and a population of around 40 million. After gaining its independence from the former Soviet Union about 30 years ago, the country oscillates almost all the time between economic and financial crises.

During the global financial crisis of 2008/2009, Ukraine could only be rescued from state bankruptcy with the help of a multi-billion dollar financial lifeline provided by the International Monetary Fund (IMF).

The economic upheavals that followed the annexation of the Crimean peninsula by Russia in 2014 and the cessation of the self-declared people’s republics of Donetsk and Luhansk in Russian-speaking eastern Ukraine have again brought the country to the brink of the economic collapse. Once again the IMF has jumped to the rescue of kyiv offer new credit in exchange for difficult economic reforms. The strategy worked, at least until Russia attacked the country in February this year.

Stuck on the road to recovery

Structural reforms imposed by the IMF over the past five years have succeeded in reducing Ukraine’s sovereign debt from over 100% of gross domestic product (GDP) to just over 50% in 2020.

The most important sector of the Ukrainian economy is agriculture. Nicknamed the bread basket of Europe, the country is the world’s largest exporter of wheat due to to its vast expanses of fertile soil which make up about a third of all arable land in Europe.

The second most important sector is that of mineral raw materials. According to the foreign trade lobby group Germany Trade & Invest (GTAI), however, the health of the sector depends heavily on developments in the global steel market, for example. Moreover, the GTAI said in a report published last fall that the need for foreign investment in the raw materials sector was already enormous before the war.

In recent years, light industries and suppliers have become increasingly important thanks to Ukraine’s relatively low wages and its proximity to European Union markets.

European automakers in particular have made investments in Ukraine in recent years, although the GTAI report noted that automakers in the country are still only loosely integrated into the industry’s global supply chain.

Nevertheless, the current war has caused severe production disruptions among European car manufacturers as Ukrainian deliveries of important parts such as wiring harnesses have stopped.

The port of Odessa on the Black Sea, a crucial hub

A key hub for Ukraine’s economy is the Odessa Sea Trade Port (OMTP), one of the largest deep-water ports along the Black Sea coast. OMTP is capable of handling 40 million metric tonnes of bulk cargo and 25 million tonnes of liquid cargo annually. The port, however, ceased operations due to the war. 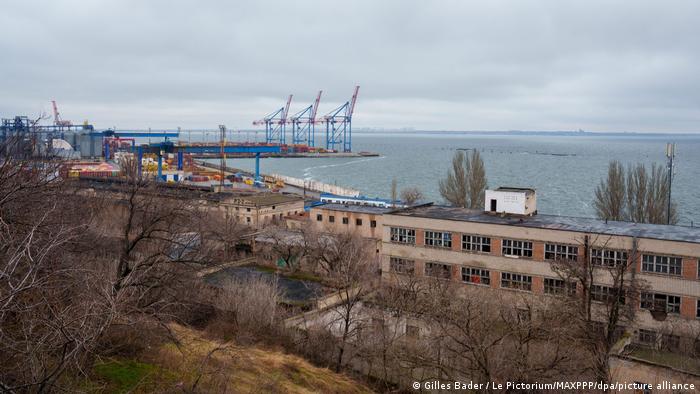 “Odessa is Ukraine’s largest seaport. It has become even more important for maritime supplies since trade routes through Crimea and the Sea of ​​Azov have become difficult to navigate,” said Philip Sweens, an executive. superior of the HHLA, to DW.

Private domestic consumption has become one of the main pillars of economic growth in Ukraine. Rising local wages and remittances from Ukrainians working abroad have boosted retail sales in recent years.

Additionally, the information technology (IT) sector is flourishing thanks to the growing number of students graduating from universities and colleges. Jobs in the transport sector have also increased.

As far as foreign trade is concerned, the European Union is Ukraine’s most important partner, absorbing about 40% of all the country’s shipments abroad. German online news portal Tagesschau.de wrote in mid-February that Brussels saw “huge potential” in expanding bilateral trade with Kyiv in the medium to long term. Of a group of 30 minerals deemed critical for the future by the EU, Ukraine has at least 21, according to the portal.

“The EU is interested in the construction of a mining deposit and [electric vehicle] battery alliance with Ukraine,” the report said, adding that there is also an option to make Ukraine a hydrogen supplier for Europe.

This article was originally published in German.